Ben Redlich's foray into children's book illustration came with The Shikker Cola Cows, written and self-published by the author. Ben has over 20 books published, both nationally and internationally. These include Jack and the Aliens and its sequel, Jack and the Skyhook, Word Weavers Press, Brisbane; the CBCA notable book, The Great Montefiasco by renowned author/illustrator Colin Thompson, Lothian, Melbourne; Circus Carnivore,written by Mark Svendsen, Lothian, Melbourne, and published in the US by Houghton Mifflin; Whacko the Chook, also written by Mark Svendsen and also a CBCA notable book, Lothian; The Pumpkin Eater from Pondicherry, written by Bruce Atherton, Lothian; the 3-part Octavious O'Malley series, Harper Collins; and Scared of Nothing, written by Boris Munster. As well, Ben has both written and illustrated the hugely popular Who Flung Dung? and its equally popular sequel Cheeky Charlie, Meadowside, UK, which have both been translated into Spanish, Portuguese, and Korean; and are best-sellers in Australia and the UK. Redlich has since illustrated Tortoise vs Hare, The Rematch, Meadowside; The Monkey Pirates, Egmont UK; and T-Rex's Terrible Tooth, Koala Books. 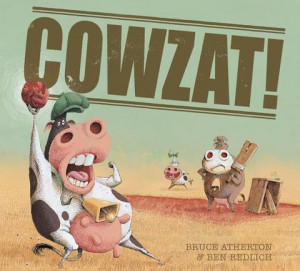